In accordance with international agreements and national law, amateur radio operators will identify themselves using a call-sign. It is common for licensed ham operators to use their own individual call-sign, but there are also situations where a shared call-sign is used by multiple individuals, e.g. when an amateur radio club have a call-sign for their shared radio station. The exact rules for this will vary from country to country, so it is important to learn about applicable laws and regulations. There are for instance countries that require the station call-sign to be used.

When using a call-sign for identification by voice, most countries allow you to simply say the letters and numbers (and the sign / is pronounced dash), but there are some countries where using the phonetic alphabet is mandatory.

A call-sign is created based on the pattern prefix – separating numeral – suffix. 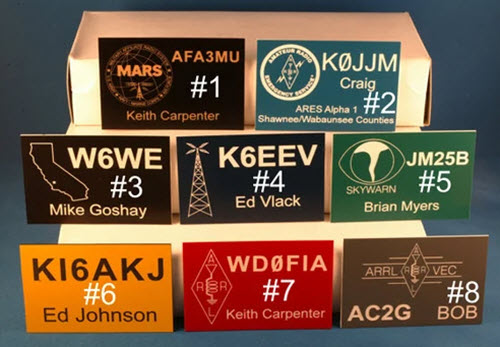 Since 1927, the International Telecommunication Union (ITU) have been allocating call-sign prefixes for operators and stations in the various countries and regions of the world. Call signs for amateur radio are assigned in accordance with ITU Article 19, specifically 19.68 and 19.69. The separating numeral and the suffix are added by the applicable national body to create a unique call-sign.

The prefix, which can consist of one or more characters, denotes the nation, state, territory, sub-territory, or similar. Example: A2 for Botswana, 3A for Monaco, and EP for Iran.

Certain parts of a country can have their own prefixes. Take New Zealand for instance, where a wide range of prefixes are in use, depending on the circumstances.

In many countries, the separating numeral conveys information and is for instance used to denote a geographical area, a class of license, or show that a licensee is a visitor or temporary resident. The separating number is normally, but not always, a single number (0 – 9).

The suffix is one, two, three or four letters.

A suffix can be followed by another suffix, to provide even more information. It is for instance customary to add /P if the radio station is portable, /M for a mobile station, /MM for a maritime mobile station, and /AM for an aeronautical station.

Operating under the jurisdiction of a foreign government

When operating with a reciprocal agreement under the jurisdiction of a foreign government, the amateur station will in most cases add information about the country/territory from which the operation is occurring.

Example: The call-sign W4/G9KLM shows that this is an operator licensed in the United Kingdom (G) who is currently operating from the United States (W4).

Adding this information in front of the normal call sign is the norm, but there are exceptions. For instance, in accordance with the USA/Canada reciprocal agreement, the country of operation is added to the end of the call sign. Example: The call-sign VE9KLM/W1 shows us that a Canadian operator (VE) is currently operating from the USA (W1).

This service is only available in some countries, and the call sign must still follow the pattern and adhere to the rules. You can for instance not chose another prefix than the one assigned to the applicable country.

In some countries, this service is available without any extra fee. In others, you pay a fixed price for your “vanity call-sign”.

To examples of countries where it is possible to select your own call sign (in accordance with the rules) are the United States and the United Kingdom. The vanity call sign is selected on the license application.

Special call signs can be issued for special purposes, e.g. for temporary use to commemorate a special event. One example is the call sign GB90MGY which was created to commemorate the 90th anniversary of the distress calls send from MGY – the radio station onboard the ship Titantic.