A ham radio operator can use a variety of radio station types to communicate. There are fixed stations, mobile stations, temporary field stations, handheld stations, etcetera.

The shack is slang for an amateur radio station´s location. It is derived from the early days of maritime radio, when small enclosures were added to the upperworks of naval ships to hold the radio equipment and batteries. 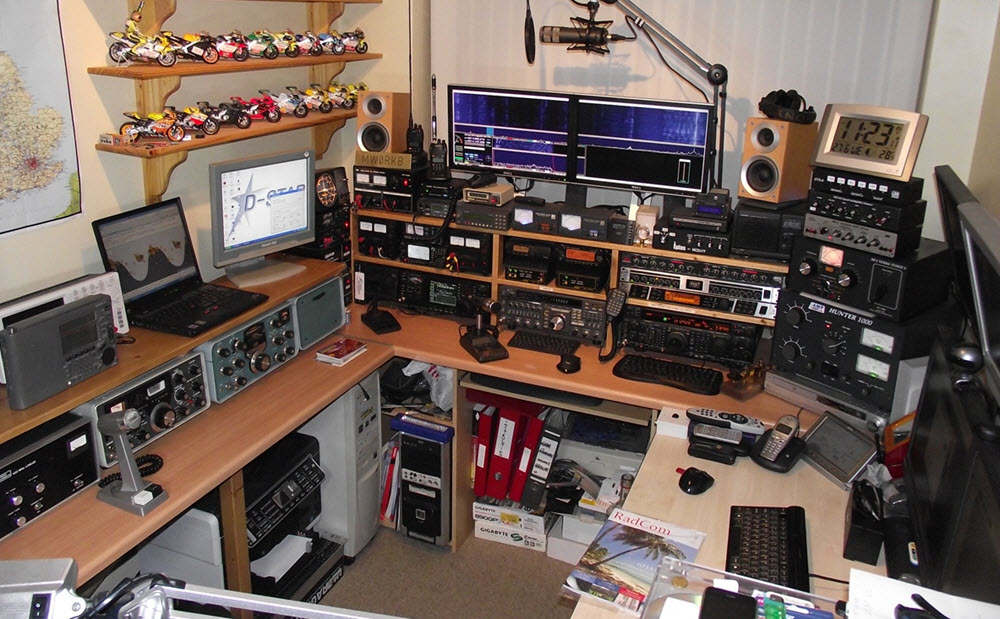 During transmission, the ham radio operator must identify themselves using their call sign. In most parts of the world, the call sign is issued together with the amateur operator license and is thus tied to the operator and not to a specific radio station setup. The licensee can therefore use their normal call sign even if they are transmitting from someone else’s radio station, although using the call sign of the station´s owner is also permitted in many countries.

In some countries, it is possible for an amateur radio club to obtain a special call sign, which can then be used by the club members when they are transmitting from the club´s radio station.

A special call-sign can be issued for for temporary event stations, e.g. for radio amateur group expeditions to distant locations (DX-peditions). The expedition participants will then use that call sign during expedition transmissions, instead of using their own individual call signs.

A fixed station is placed in a permanent structure and is not intended for being moved anywhere else. A majority of the world´s ham radio operators use a fixed station as their main station, e.g. one set up in their home or in a ham radio club building.

Fixed radio stations will typically get their electrical power from the normal electrical grid, but some also have an auxiliary power source (batteries, electrical generator, etc) to use in emergencies.

Certain equipment may require a special solution since they can only handle low voltage DC.

An amateur radio station installed in a vehicle is known as a mobile station.

A typical mobile station for a car or bus will have a transceiver, a microphone, and one or more antennas, and it will be designed to be safely operated by the driver while driving. It is unusual for such a mobile station to have the necessary equipment for Morse code communication.

It is customary for an operator transmitting from a mobile station to add a /M to their call-sign. It is pronounced “slash mobile”.

It is possible to purchase a transceiver that is specially made for vehicles; one that is smaller than those normally used in fixed stations and can be easily installed under a seat or in the trunk. Some models have a detachable control head to mount in a separate location.

Power for the transceiver

A transceiver intended for mobile stations is normally designed to run on 12-16 VDC, which makes it easy to connect to the vehicle´s starting battery.

Antennas intended for a mobile station will be designed to be fairly short, as the vehicle must be able to safely pass under bridges, overpasses, etcetera. The antenna must also not poke out horizontally in a way that would create a hazard in adjacent lanes.

The typical antenna for a mobile station is an omnidirectional antenna.

What is a rover station?

The rover station is a special kind of mobile station used for certain VHF amateur radio contests in North America. It is usually designed to be operated by a passenger in the vehicle; not by the driver. A rover station commonly includes multiple transceivers, transverters, directional antennas, and a laptop computer.

It is customary to append a /R to the end of your normal call-sign when operating a rover station during a contest. It is pronounced “slash rover”.

What is a maritime mobile station? 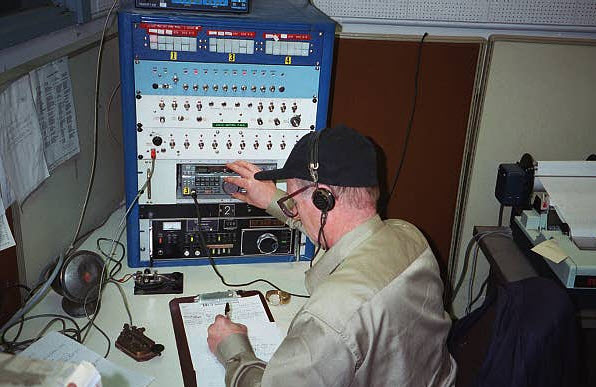 It is customary to append a /MM to the end of your normal call-sign when operating from a maritime station. It is pronounced, “slash maritime mobile”.

In addition to having the required amateur radio license, a ham operator onboard a vessel must also have permission from the captain to operate the station.

If the vessel enters international waters, the radio station must adhere to the regulations of the country where the vessel is registered (“flagged”).

What is an aeronautical mobile station?

It is customary to append a /AM to the end of your normal call-sign when operating from an aeronautical station. It is pronounced “slash aeronautical mobile”.

In addition to having the required amateur radio license, a ham operator onboard an aircraft must also have permission from the pilot to operate the station.

An amateur radio station set up in a temporary location (but not installed in a vehicle) is called a portable station. A typical set up designed to be portable will include the standard items (transceiver, antennas, other necessary accessories) but in small, compact and lightweight versions.

Portable stations often use batteries as their power source, to make them more independent of the location and situation. Naturally, portability must be taken into account when selecting batteries as well. Some radio stations designed to be portable operate at a comparatively low transmitter power output in order to not drain the batteries quickly.

Amateur radio operators travelling to DX-peditions often use sets that can be easily broken down into smaller components and then put together again without much effort, since this makes the station easier to fit into luggage.

Examples of situations where portable stations are used:

It is customary to append a /P to the end of your normal call-sign when operating from a portable station. It is pronounced “slash portable”. In some countries, this addition is not just customary – it is mandatory.

In a handheld station, all the necessary equipment have been condensed into a device that is small enough to be carried in one hand. A common design for handheld stations is the one where a transceiver is integrated with an antenna and a battery.

A majority of the commercially available handheld stations are designed to operate on the VHF or UHF amateur radiobands. In most cases, they will only have capacity for FM voice communications transmissions, and to conserve battery power, the transmitter power will be 1W or lower. This means they are only reliably useful within a small area, often just a few kilometres (depending on conditions).

When an amateur radio station is onboard a satellite, space shuttle, the International Space Station, or similar, it is called a space station. In this context, all stations that are not space stations are called ground stations, to distinguish the two types from each other.

What are repeater stations?

A repeater station can have an extra big impact if it is in a favourable location, such as on the top of a mountain or tall building, and can make two-way communication possible for amateur radio stations that would otherwise not be able to reach each other.